Supercharge your workouts with beet juice

Supercharge your workouts with beet juice 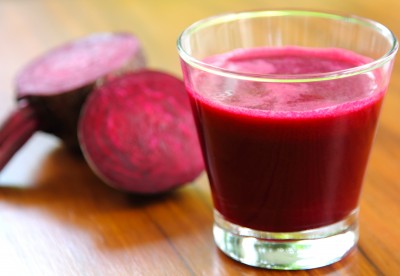 How would you like to be able to work out longer and use less effort to get the same benefits? Oh, and without resorting to Lance Armstrong's strategies? It's possible, according to research finding that juicing beets can enhance the performance of elite athletes.

But even for those not planning to race in the Tour de France, researchers suggest that beet juice could also help the elderly or people with heart or lung-conditions enjoy more active lives.

In 2009 researchers at the University of Exeter found that beetroot juice enables people to exercise for up to 16% longer, leading athletes to experiment with its effects. A follow-up study suggested that drinking beetroot juice could help a much wider range of people.

The small study, published in the Journal of Applied Physiology, followed nine healthy young men doing low intensity exercise and found that they used less oxygen while walking, effectively reducing the effort it took to walk by 12%. The authors believe that for older people with cardiovascular issues who take in less oxygen, beetroot juice could help them do things that they wouldn't otherwise be able to do.

The beetroot juice both widens blood vessels, reducing blood pressure and allowing more blood flow, and at the same time, it reduces the amount of oxygen needed by muscles during activity. The two effects combined have a significant impact on performing both low-intensity and high intensity physical tasks.

The study concluded that the high levels of nitrate in the beetroot juice are responsible for the effects. Nitrate in beet juice is converted by bacteria on the tongue into the chemical nitrite which eventually enters the blood stream, and lowers blood pressure. Consuming nitrate-rich vegetables, such as beets, spinach, lettuce and other leafy greens may contribute to a healthy cardiovascular system.

How can you get the benefits of beet juice in your own workout or just your everyday activities? You can always buy beets and juice them yourself.